Better collaboration between all parties!

It should be remembered that BIM (Building Information Modelling) is a breakthrough innovation based on 3D and data to transform the way we build. Cost reduction, traceability of different actions throughout the duration, environmental benefits: the contracting authorities have everything to gain in the development of this approach which results in a better collaboration between all parties.

Yet some actors, especially small and medium-sized organisations, see the variety of languages and formats used in BIM as an obstacle to their approach: which software to use? Will it be compatible with those used by the parties involved, other participants? Will I lose data during iterations and exchanges with my partners…? So many questions that are at the heart of the success of a BIM project and for which – good news! – Solutions exist.

The main challenge of BIM today is the ability to collaborate a variety of actors effectively, despite the plurality of languages, formats, software and standards. Each actor can enrich the central layout of the project with information related to their activity or speciality through the transmission of data. This distributed model greatly facilitates the exchanges between the actors, making languages and software communicate for the benefit of the project.

The industry is not there yet. Most calculations, including thermal or electrical, are not yet in the digital model. The challenge for ‘BIM’ software companies lies in the ability to travel data between software without alteration or loss of information. Different exchange formats exist, like the principle format, IFC. But national environmental and energy regulations can complicate matters, and despite the completeness of IFC, it does not integrate everything. For example, the maximum temperature or the coefficient performance (COP) of a boiler are not structured to be understood by the RT 2012 calculation software, which is a French regulation.

Faced with these difficulties, some actors advocate an agnostic approach to formats and languages, to allow better collaboration and fluid exchanges between the specifications of each actor, without having to worry about software compatibility issues. BIM&CO has structured its ecosystem around an API capable of interpreting formats or standards to communicate with the software used within the framework of a project.

BIM&CO has recently linked to BBS software to facilitate the integration of RT2012 thermal information in the BIM process to create data gateways between the central models and ClimaWin software, used by specialised consultancy companies in the thermal sector to implement the thermal regulation RT 2012, now mandatory in the building sector in France. This was a crucial issue for BBS to optimise the duration of the projects and the collaboration between the participants on thermal topics. Thanks to data structured by BIM&CO’s API and BBS‘s sector expertise, ClimaWin obtained its first extremely promising feedback, saving on average more than two-thirds of the time for thermal engineering offices . In effect, via the API, the engineer retrieves the data necessary for RT 2012 calculations, such as data from Hitachi’s heat pump for example. This avoids the re-entering of data and the iterations between an archi model and a fluid model.

The ClimBIM plugin from BBS used in Revit: 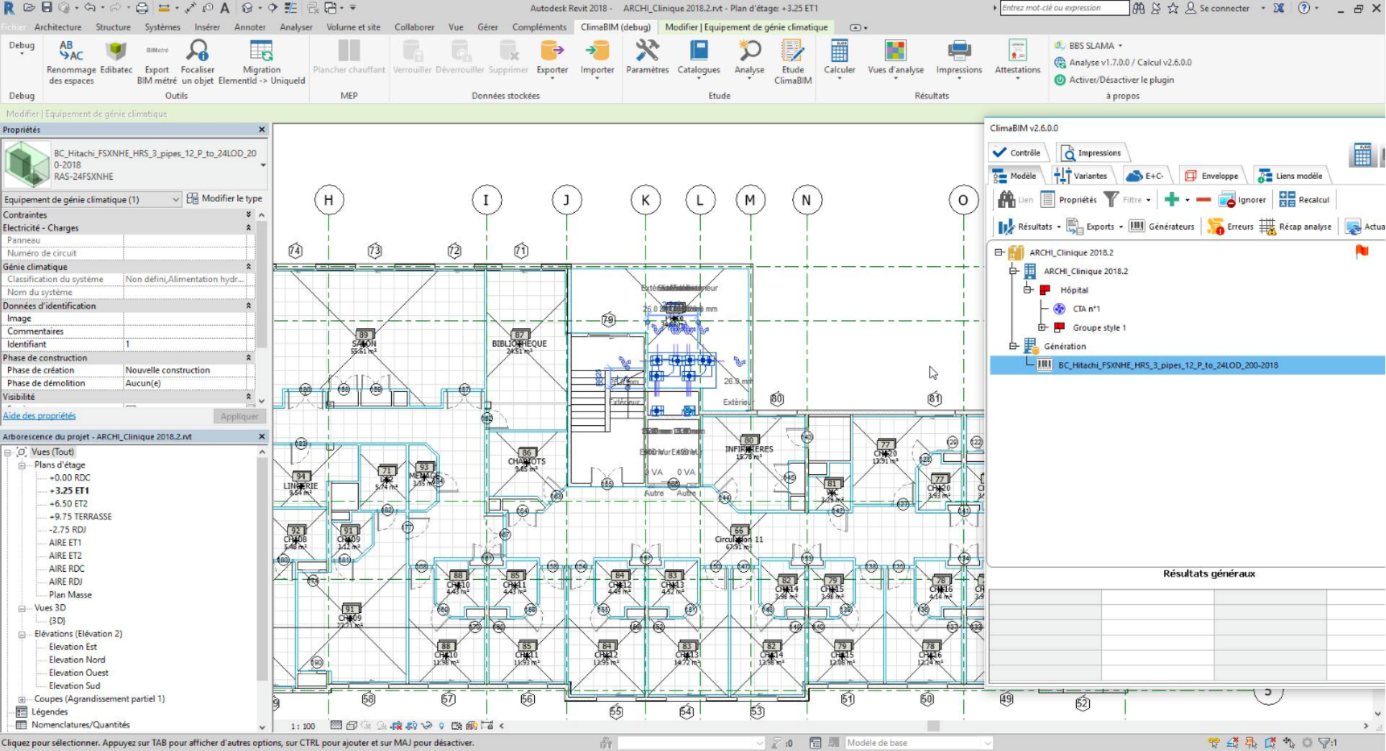 “BIM is above all based on a vision of the building world centred on exchange and collaboration. Technology cannot be a constraint, but must support the project and help it to advance. Even if the final responsibilities of the project remain unchanged, the BIM must be supported by an open vision and not restricted by the specifics related to formats and software. An agnostic BIM and, most importantly, open!” concludes Valentin Malemanche of BIM&CO.

Testing of the solution is in progress by the users of thermal software, do not hesitate to contact us!